Please read! End of support for Trusty build image: Everything you need to know

On October 4, 2021, Netlify will be fully removing support for the Ubuntu 14.04 (Trusty) build image. Trusty has been End of Life since April 25, 2019, which means it hasn’t received security or maintenance updates since then.

Builds on Trusty make up a very small percentage of total Netlify builds, but we know this is a significant change so we’re giving you plenty of time to migrate.

How do I know if my site is using Trusty?

If you’re not sure whether your site is building with Trusty, you can check in two places:

In May, we released a new build image based on Ubuntu 20.04 (Focal). In addition to a newer version of Ubuntu Linux, it includes some version updates to included language and software dependencies. Some dependency versions that were included in the Trusty image are not included in the Focal image. This may cause issues for sites that relied on those versions.

What will happen if I don’t update my site’s build image?

After October 4, any new builds using the Trusty build image will fail. We will continue to serve traffic to your existing site, and you will still be able to deploy manually via Netlify CLI, but you will not be able to run new builds of your site on Netlify until you update to a newer build image.

How do I update my build image?

If you have several sites to update, you can migrate to Focal in bulk using @jlengstorf’s npm package: ntl-focal-migrate - npm

Before making this change to a critical or production site, we recommend running a test build first.

How can I run a test build with the new image?

One way to run a test build is through the Netlify UI:

How can I make my site work with the new image?

Generally speaking, a change in available language or software dependency versions is the cause of the error. This could be a version you set yourself, or one that was set for you by default when the site was first created. Here are some general steps for troubleshooting:

If you get through these steps and you’re still stuck, or if you have any other questions along the way, let us know!

I’m not a developer and do not find useful the information to do the required action that you mention to prevent a faliure.

I enter to the UI location mentioned: 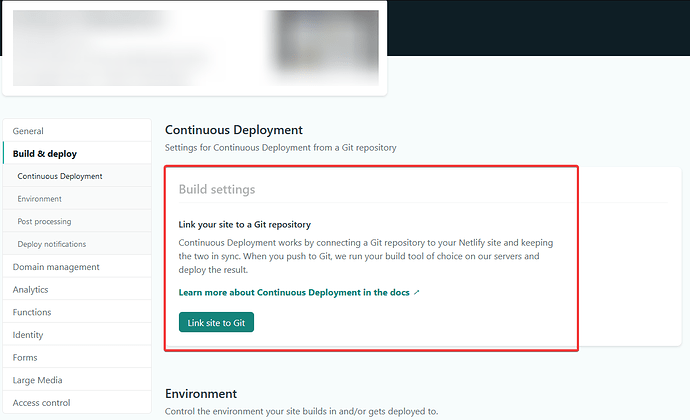 But I don’t have “Git repository”, to publish the sites I just upload a zip file with the files of the static site. It always work perfect.

What should I do now?

Hey @malawal745,
If you deploy manually or by uploading a zip file, there are no changes needed and you’re all set. Sorry for the confusion here!

Oh, ok, thanks. I guess should be considered my case in the communication (or not let me know at all).

Hope can help to let you know that are users like me, and may be confused too.

I also got this warning email for one of my sites on Netlify. All my sites are served from GitHub and I have never heard of Trusty and certainly never used it.

How are you determining who gets one of these emails? Seems like you are way off the mark.

Hey @ozfiddler,
Your site is built with the Trusty build image and you will need to upgrade before September 19. You can check it out here (hopefully also have the site linked in the email we sent!) https://app.netlify.com/sites/peachtreecabin-com-au/settings/deploys#build-image-selection

Hi Jen, So this is something that was automatically selected for me when I set up the site? I have never heard of Trusty, Xenial or Focal. I have no idea what they are or what they do. OK, I’ll change it over.

Yup, that’s correct! Trusty was the default build image for several years so it was selected for you when you built your site. We try to balance picking smart defaults for you so you don’t have to think about them with also giving you control over how you build. In this case, a default that we picked years ago needs to be upgraded so you unfortunately do have to think about it. But we’ve tried to make the switch as straightforward as possible!

Many thanks for your understanding, and remember that 1) we’re around if there are questions and 2) you have until September to make the change.

Trusty was the default build image for several years so it was selected for you when you built your site. We try to balance picking smart defaults for you so you don’t have to think about them with also giving you control over how you build.

It probably would have been good to start the advisory email with this statement. My first reaction was “This doesn’t apply to me. There must be some mistake”.

I tried updating to a newer image and noticed that Ubuntu’s 2020 LTS version is still marked as beta by Netlify. If I want a stable version, I have to select the 5-year-old LTS version from 2016. How come support for the LTS version that has been out for over a year isn’t stable yet?

Is posting stack traces kosher/in-scope for this thread?

I host a couple sites on Netlify, built with Hugo. Unfortunately, breaking changes in Hugo have led to me building with a very old Hugo version (0.52). I’ve been putting off doing the upgrade since I’m going to have to go track down a bunch of deprecated code in my theme and update it manually.

Anyhow, I tried bumping to Focal and got the above. To be perfectly honest, all the CI build stuff has basically been black magic voodoo to me as I’ve never had to worry about it before. I skimmed the trace and see that node/npm and ruby are being installed.

If my site is being built with a Hugo binary file, why are these things even being installed for the build?

I’m experiencing a very similar issue to @StevenTammen, not sure how to go about fixing it. Will be following along closely.

My site builds on Xenial. The stack trace for that one:

Are ruby and PHP dependencies for Hugo? We have these lines next to each other:

Dunno if I’m being any help here. If I’m understanding the trace correctly, the problem package seems to be ruby 2.3.6.

I’m going to bump my sites to Xenial for now, but would like to setup the more modern image, if for no other reason to save myself from having to do this again later.

Nice, Xenial is all good!

I have more than a dozen sites using the depracated Ubuntu 14 image. All of them are test sites, none are critical production.

Is there a way in which I can bulk upgrade them to the latest recommended image?

hello! the link that you have posted foes not work for me sadly. i have followed the instructions of this form as well as clicked the links in the email telling me to change the image. the last time i changed my website was in 2018 if that helps any. thanks

I ran into the same issue as @StevenTammen. Switching to the 16.04 image worked.

This part of the log in particular looks a bit weird:

It seems to be erroring out because the OpenSSL 1.1.x headers are installed and it wants OpenSSL 1.0.x. It’s also trying to install Ruby 2.3.6, which is significantly older than the version that shipped in Ubuntu 20.04.

On a hunch, I tried updating my build config to add the following:

… which is the version of Ruby that shipped in 20.04. That seemed to get things building for me.

It seems a bit weird to have to configure a Ruby version when nothing in my site depends on Ruby. Perhaps the build script should default to a newer version of Ruby when using the 20.04 image?

I can replicate. Adding ruby 2.7.0 to my build configuration also fixes the build errors for me and lets me run Focal. Huzzah.

I’m just like you in wondering why in the world a ruby version dependency even matters for building a site that builds using a Hugo binary, but