The site is a Remix site with tailwind css and that’s about it. Nothing unusual going on. It builds and runs without issue locally. I spoke to someone form netlify on Discord and he directed me here. 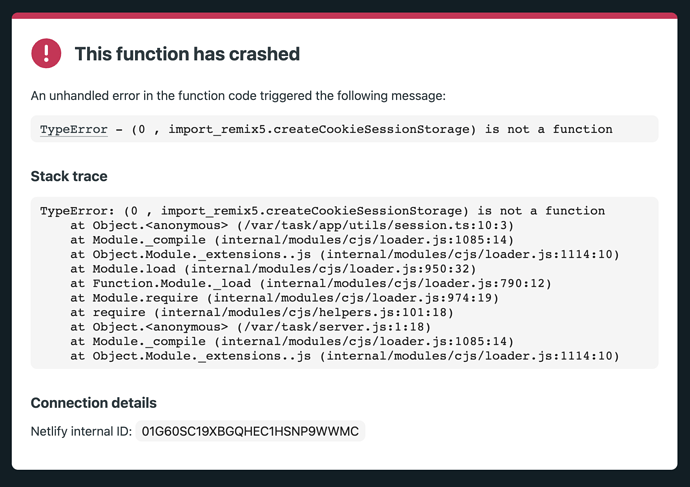 Toml file is pretty much the default that the netlify template comes with when using remix.

This has been going on for over a month and I’m at a total loss as to what the problem is.

I have tried using the CLI and every time it takes forever and eventually fails with a 500.

I can reproduce the error locally by deleting the cache and netlify folders. Even though they are rebuillt when running npm run build the site crashes with the error above until I stop the server and restart and then all runs as expected

This appears to be related to:

### What version of Remix are you using? v1.3.3 ### Steps to Reproduce Upgrad…e from v1.3.2 where server-runtime exported createCookieSessionStorage and now it is no longer there. ### Expected Behavior It should still be exported. ### Actual Behavior x

Since Remix integration is not handled by Netlify, it’s usually better to ask those folks about it.