I completely new to this but

SO I just learned to make a website today. so this is my first time deploying anywhere and youtube suggested that I go netlify. below is the deploy log and I don’t understand a thing. pls help me (also a kid)

I’ll try and help you interpret your error log:

^ The system is about to try and install packages via the npm package manager.

^ It failed to parse (basically ‘read & interpret’) the contents of the package.json file because it isn’t in the right format. It indicates it is an empty file, which results in an ‘empty string’ and that is not valid JSON (which is the format it requires).

^ The build has failed during the npm install.

If you check the package.json file in the repo, you’ll see that it’s empty.

You could try any of the following…

hey @nathanmartin, thank you so much for stepping in and being so thoughful in helping a newbie troubleshoot. Really appreciate the time you spend in here answering questions and getting people unstuck

@qweasdf , nathan has done a better job than i could explaining, i don’t have anything to add here (except for…if you don’t need a package.json, then it’s likely the project doesn’t need to be built. If it doesn’t need to be built, then you shouldn’t have a build command entered into the UI. Do you? it might be helpful for us if you popped a screenshot of your build settings.)

We’re pretty close to getting this to work, i think.

Hi there! first of all, massive thanks for replying. Second, I learned that I need to download node.js first before doing any of this stuff. Third, it’s still broken. I did npm install express then npm install netlify-lambda. THEN it said I have 5 high vulnerabilities and some folder named node modules suddenly popped up which I kid u not was scary. (is this hacking or some related stuff?). Then I committed these changes regardless of me not knowing what will happen. THEN I did what Mr. Nathan martin said to delete my empty package.json.

Per request, here is my build settings: 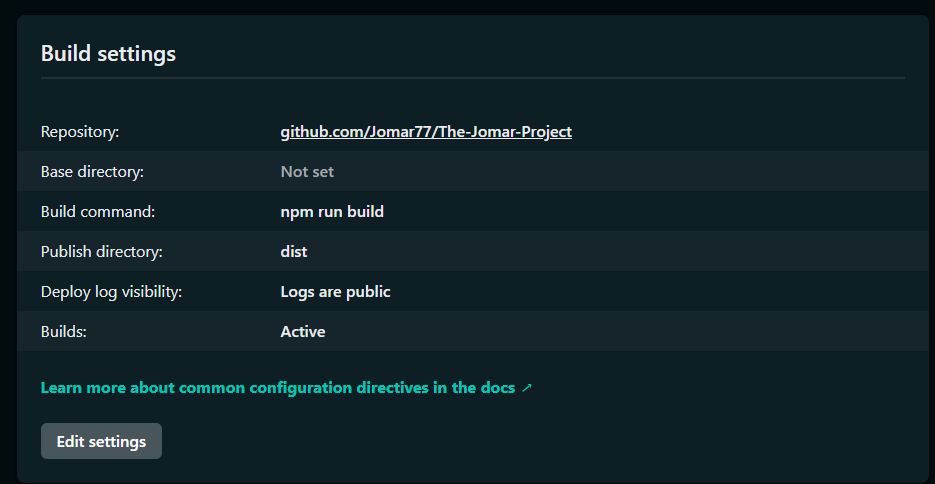 I learned that I need to download node.js first before doing any of this stuff.

^ That’s not strictly true, as it’s possible to deploy a website on Netlify with nothing but a single .html file. But it is a requirement of some of the tooling that it looks like you’re trying to use.

^ You won’t need express to serve your site when deployed to Netlify, it’s also unlikely you will need netlify-lambda.

If you’re trying to use express to serve the site locally, instead of either you should probably check out the Netlify CLI which provides tooling for local development and working with functions.

THEN it said I have 5 high vulnerabilities and some folder named node modules suddenly popped up which I kid u not was scary. (is this hacking or some related stuff?).

^ The node_modules folder is where the packages that you install via npm are installed (along with their dependencies). You can read more about it online, and run npm audit to see more details about the specific vulnerabilities that are in your dependencies.

With the configuration that you’ve shown, you’re likely to run into an issue with your “Publish directory”.
You have it set to dist, but there isn’t a dist folder in your repo, (nor is there any code that builds one).

What everything needs to be set to ultimately depends on what you’re trying to do, so it’s difficult to provide any kind of exact guidance.

However if you fix the build script issue explained above, and then move these files & folders from:

Hello there Mr nathanmartin! Thank you for replying to my inquiries once again. Thanks to you I did publish my website successfully.

MR. nathanmartin, Thank you so much for your help. It didn’t work still BUT upon browsing the forums. I learned that Philippines ISPs block netlify for some reason. It was working waaaaay before but I needed to use a VPN to access the site. Thank you once again!