It’s alright to expose the Sentry DSN (REACT_APP_SENTRY_API_KEY in my case) and the REACT_APP_STRIPE_PUBLISHABLE_KEY is meant to be safe to be publishable too so should be ok.

As long as you are aware of how this works and are comfortable the keys are safe in the front end.

How are you access the variables? Remembering that variables are available at build time, not when the app is run in the browser.

Can you share a repository, or a section of code, where an environment variable is accessed?

Here is a good example of where I’m using an environment variable as the url base in a POST request. Hopefully makes it a little clearer.

About being available during build time, the interesting thing is that when I check the static files from the deployment, the environment variables are not in the minified code which would suggest they aren’t being added during build time.

I have tried, but cannot replicate this.

Regardless of the mode (production or development) and regardless of sourcemap generation (true or false I always see the values of the variable, and not the variable name, is the resulting built code.

I’m currrently trying to build a new project bit by bit and see at what stage it fails (I’m hoping not right at the beginning). Will post anything I find here.

I am curious about the sections in main.XXX.chunk.js such as

and the source code that has created these.

Perhaps this issue, or this thread might hold some insights (or even this issue.)

Ok so I had some time to strip the project back.

I have discoved that the problem is likely related to the CircleCI steps in my CI/CD pipeline.

When I push code from git, I forgot to turn off the automatic deploy from Github so it deployed the site twice:

The second deploy preview logs the Netlify env variable as undefined - I believe this is the deploy built using the CircleCI pipeline.

So my question turns to is there anything inside these CircleCI steps that looks wrong?

I will continue investigating this but hopefully this added information is helpful.

While I don’t know/use CircleCI, looking at the workflow from the point of view of something I might do manually, I see an issue I believe.

It appears the build is happening inside CircleCI, then the built files are deployed to Netlify. So unless the REACT_APP_XXX variables are set in CircleCI they are going to take undefined in the built code as the values are injected at build time not deploy time. This is the same as running yarn build (npm run build) locally then deploying to Netlify (whichever way you choose) and not having the environment variables defined locally when building.

If you are using Netlify CLI to build and deploy and have it linked to a Netlify site, the CLI will pull the environment variables defined in the UI while building.

Edit:
I tested this by first running netlify build with a linked project, then netlify build -o (-o is offline). The resulting code looks like that I previously observed in your deploy and is observable in the last test deploys you made:

Ah that is interesting, thanks for testing it out. I actually ended up going a slightly different route to bring the build away from circleci. My circleci config is now like this:

Obviously much shorter and also saves a lot of build minutes.

Most importantly however I can now see the environment variables

so I call that a win for sure.

However, another problem has weirdly arisen.

The deploy preview url in Netlify is showing the correct new build but the new deploy isnt displaying in my netlify.app url for my site or the domain I have set up with my site.

I have tried to fix this all day but no idea why. Any help with this last bit?

Do you have Auto publish disabled by any chance?

Unfortunately not. Seems to be enabled. 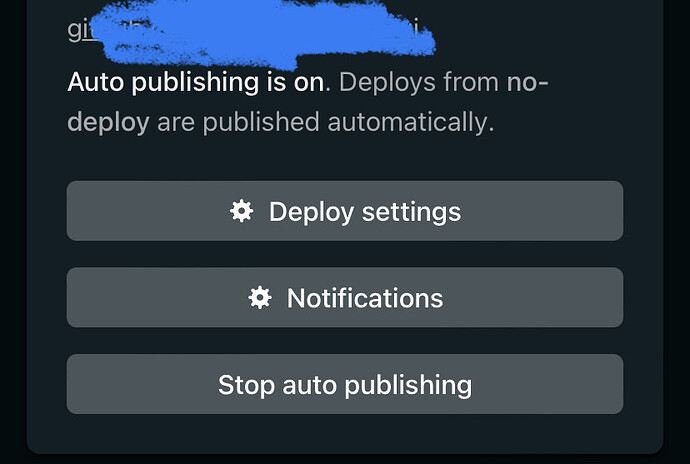 When I’ve used a build hook, exactly as you have in the workflow above, always results in the build auto-publishing (at least on the production branch; this may differ on a non-production branch though I have not tested this.)

Oh yeah I set the production branch to a random name to avoid double deploys from GitHub and my circle I pipeline. Any other options here?

So the latest build, as triggered by the webhook, does not have Published next to it in the deploys list?

The build hook is triggering the production branch?

No it does not have published next to it

If it is a deploy preview, you’ll find this thread useful

I had to get around this "New Users may only post one picture thing. [image] Text for searching: Here is my scenario: On GitHub, I’ve made some “GitHub Actions” that use the netlify cli to publish a deploy preview. The issue I’m having is that once I publish the deploy preview, there is no hook to tell github that for the PR I have open, netlify should tell github that my PR has had a deploy. For example, I have this PR: https://github.com/NullVoxPopuli/emberclear/pull/128 With this C.I…

Any idea what they are referring to as a solution here? Will this work for auto publishing for me too?

Hi, My repos are in github and I want to deploy/publish using webhooks but as I’ve seen in this post https://answers.netlify.com/t/triggering-publish-with-a-webhook/4191/13 that it needs to be done from your side. Could you please remove the webhooks from repos so I can deploy/publish using buildhooks api call. my username is neoms21@gmail.com Thanks

I’m not aware of what is referred to there.

Are you using the build hook found under https://app.netlify.com/sites/YOUR_SITE_NAME/settings/deploys#build-hooks or the createSiteBuild API?

Using the former is what I have referenced previously.