Please read! End of support for Trusty build image: Everything you need to know

I’m confused as what the problem is here. If you actually give Focal (20.04) a shot, you probably won’t even notice a difference as compared to Xenial (except for the built-in dependencies).

I think, it’s important to release features gradually with thorough testing and keeping it in Beta unless very sure rather than hurrying with updates and releasing broken stuff.

By the sound of it, it does seem like you don’t wish to risk using a Beta build, and developing anything new takes time, testing and lot of resources. So, instead of releasing a Beta build with every new update that many people might not use (because it’s labelled Beta), I think it makes more sense to gradually roll out huge changes.

Also, even though it might be deprecated in April, it’s by no means unusable. I mean, there are still people using Trusty and trying to migrate from it, so Xenial can still serve a lot of your needs.

Hi, I was using BitBalloon and it used to have an interface. I have not released my changes on Netlify. I was using the site as a “dev” site to see changes on the web, not as a webhosted site, not yet.

hi @SCloudcroft , thanks for your patience. can you try and explain what you are trying to do and what obstacles you are facing in a different way? i am not sure we understand, which is making it difficult to give you specific assistance. thanks!

I’m attempting to change the build image for my site by following these directions:

“To change the build image for a site, go to Site settings > Build & deploy > Continuous Deployment > Build image selection, and select the build image you would like to use. Our buildbot will use this image for all production deploys, branch deploys, and Deploy Previews.”

Unfortunately, here’s what I get (see uploaded image) and there is no option “Build image selection.” 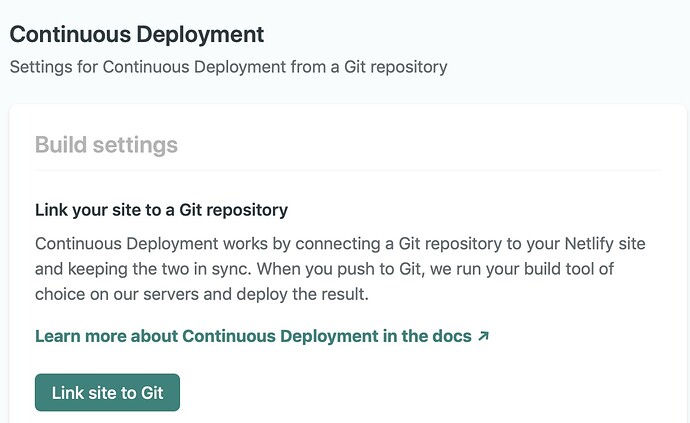 OK. That makes sense. I don’t know what I need to do. I have a Trusty build image that is expiring on September 19. I apparently need a new build image. How do I get one?

Hi, @mbabc. I’ve checked the team associated with this email address at Netlify. There is only one site on that team and it does not use a build image.

So, it doesn’t appear that you need to do anything and that the email was sent to you in error.

If there are other questions about this, please let us know. For example, if the site in question isn’t under a team using this email address, we will be happy to take a look at whatever team this is about.

You can check the email address at Netlify here:

You can check the email address for this forum here:

If those two email addresses don’t match, please feel free to private message me the email address for Netlify itself.

I can’t find the build image tag as my deploy logs aren’t showing up, and there is no Build image selection option following continuous deployment. Could you let me know if I need to update my two sites or are they fine? And if so, how to proceed. They are very simple and small sites. Thank you!

Hey @blindinglight,
Could you please drop a Netlify site URL here so we can take a look? It’s possible you got this email in error- we mistakenly sent it to people who deploy manually who are not actually impacted by this change.

Hey @blindinglight,
Yup, both of those sites are manually deployed, so you got the email in error- no further action is needed. Sorry for the confusion!

Thank you Jen, that makes sense, I appreciate your rapid response.
Best,
Alex

This is very good to know. Thank you luke.

For folks who aren’t finding your build image selection settings: this happens for sites that are manually deployed and have no Git repository connected for running builds. A site with no builds has no build image, so there is nothing you need to do. Unfortunately, you received the deprecation notice due to an error in the dataset we used for sending the emails.

As a side note, shoutout to @SCloudcroft for being another BitBalloon user! For those who don’t know, BitBalloon was a much-loved drag & drop deploy service and the precursor to Netlify, dating back to 2014. The founders of BitBalloon created Netlify when they decided to add continuous deployment for Git-backed static sites. BitBalloon remained in service until August 2018, when we migrated BitBalloon sites to Netlify and added Netlify Drop as an alternative landing page.

For a blast from the past, you can check out the old BitBalloon site on the Internet Archive!

@codemonkey @johnkarahalis The Focal image has now graduated out of beta.

A few months ago, we released a new build image based on Ubuntu 20.04 “Focal Fossa” as an opt-in beta. Today, it graduates out of beta, as the default for all new sites!

For existing sites, you can still switch to the new build image by visiting your site dashboard and navigating to Site settings > Build & deploy > > Continuous Deployment > Build image selection (more info in docs). For more information about migrating sites to Focal, and troubleshooting any errors you might find along …

I was using Trusty build image with Node 14.16.1.
Which Node version should I use now with Ubuntu Focal 20?

This is how I was setting Node version in netlify.toml file:

Node Version override is independent of the build image. You can choose to stay with the same version or use a different version according to your project’s needs.

I’ve hit the same issue as everyone else. @jamesh’s steps solved it for me, but asking people to migrate to a new image that doesn’t work is… suboptimal.

Switching images should clear the cache, we shouldn’t have to relink by hand. Until this works, deprecating the old image is premature.

Hey @Stavros,
Thanks for the feedback, and we agree that this snag is not ideal. Where we landed in the end is that it’s critical to move forward with notifying you and other customers about the upcoming Trusty deprecation and continue encouraging migrating to our newest build image. In the meantime, we’ve been discussing a lot of different options for handling the dependency discrepancies in the build image when upgrading, like:

If you or others have opinions about those, we’d love to hear.

Thanks for writing this @hrishikesh.
I’ve created a GitHub repo based on your script, knowing I’ll probably be repeating this process in a few years or so!

I hope that is OK that I share this repo @hrishikesh

Contribute to Jinksi/netlify-api-scripts development by creating an account on GitHub.